August is Senior Pets Month and BlogPaws and I wanted to take the opportunity to talk about my pets a little.  I talk about them a lot, but what I don’t do is talk about the pet’s that have since passed on.  I don’t have any pets right now that I would classify as seniors.  My dog is getting close to their since companies say 7+ is seniors and Kratos is almost 7 now.

In my life I have had to have two pets euthanized.  My first pet I had to go through losing was my dog, Sandy.  She was my best friend growing up.  My parents got her a year before my sister was born.  I was about a year old when they got her. Sandy was a gorgeous Golden Retriever and Labrador mix.  She had a pretty coat and I admit she was a bit prissy, but that was my dog.

This is the only picture of my girl that I have here at home with me.  The rest are all on film at my parents house.  The picture includes all of my family, but oddly enough no one was looking at the camera and a couple of us were talking in it, probably to Sandy so I just spotlighted my gorgeous dog.  She had her quirks.  She hated to swim and she really didn’t like to be wet, but boy was she proud when she caught a bird for dad.

The other pet that I lost was shortly before I got my two monster cats in January of 2010.  Tigger was or big, fat orange Garfield cat that had been my boyfriends cat since childhood.  We had him living with us for about three years before he had liver failure.  He was 15 years old and ready to go, but man that cat had a love/hate relationship with everyone he met.  You did things on his terms and his terms only.

I loved that cat even as weird as he was.  He was my baby.  I would walk around the house carrying his fat butt.  Not just anyone could do that either.  I was one of like three people who were allowed that privilege.  He would go butt lick crazy for popcorn.  When he hear that first pop of a kernel popping he was instantly next to the stove or microwave and he wouldn’t leave your side until the last piece was gone.

No pet will ever replace these two lovelies, but I have and I always will have more room in my heart for more pets in my life.

Blog Paws shared this awesome infographic with me all about Senior Care for your pets and I just knew I needed to share it with you, too.

Do you or have you had a senior pet in your family?

Over the past almost two years that we have had our two little kitties things have been awkward between them and the dog since we got them.  It took a long time for the cats to be willing to be around the dog and even then they would only run by or stay in the room while he was sleeping.  They were like this the whole time we were at our old house.

When we moved the late summer of ’11 things were changing.  We moved and all the animals moved in at the same time.  I believe that this really helped.  The cats were out in the open more and they would play in the same room as the dog.  Things even got better.  The cats would sit on the backs of the couches and arm rests with the dog on the couch.

It wasn’t until just two days ago that we caught our dog and cat curled up on the couch next to each other and it has been a common thing now.  Whether they are on the couch or the dog bed, I am finding them all over the place cuddled up next to each other.  I am not sure if it is because they are that comfortable (the cat does wake up any time the dog moves) or if the kitty is chilly because we have not turned the heat up very high.

I think it is the cutest thing in the world and I am so excited to see my pets getting along so well.  They have been play buddies for awhile, but they had never been this close which made me sad.  I almost jumped up from the other couch to take the picture, but instead had my boyfriend, Dan take it where he didn’t have to move so that we could get a picture with them actually sleeping.

Have you ever caught your dog and cat doing anything cute together? 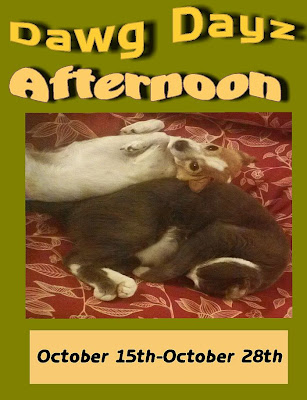 Dawg Dayz Afternoon Giveaway
is being hosted by…
Bloggity Blog, Parsimonious Pash, Homeschooling Mom 4 Two and Mama’s Misson
Here are our wonderful Sponsors for this fabulous event:
Please show your gratitude by visiting their sites and taking a look around. To visit please click on the pictures.

Pets bring us love and comfort, they can heal a broken heart and make us laugh.Some of out pets work for us as service animals, farm help, and rodent control. They are our companions, friends and sometimes our family. That’s why it is important to give them the things they need to keep them happy and healthy. It is our pleasure to introduce you to some of the best, most interesting and fun products we have been able to find. Have a look at our prizes, visit our reviews and leave a comment!

To enter to win these great gifts all you need to do is complete the easy mandatory entries.

The rest of the entries are optional so you don’t have to do them, however the more you do the better are your chances to win one of the great gifts we are giving away!

Disclaimer: Parsimonious Pash and Bloggity Blog did receive samples so we could write our reviews. Having received them for free has not altered our opinions in any way. Our opinions are our own. None of the blogs involved in this giveaway are responsible for the delivery of any of these gifts. The sponsors will be sending them out directly to the winners with the exception of the Gift Card which will be sent out to the winner by Bloggity Blog.

Without the help of great bloggers these events would not be. I want to thank each and every blog who has joined Kim and I in this fabulous event. Please show your appreciation by visiting the blogs below and be sure to say hello on one of their posts!

I was given this Pet wash/shampoo to review and was pretty excited because I have already fallen in love with Mr Green’s Cat Litter Deodorizer and their Drain Treatment.  This product has the same Lemon Grass smell to it which is very lemony but does very well at removing odors.  My dog when I bathed him was not stinky but did need to be bathed.

During shedding season we bathe our dog, Kratos a lot because he gets so itchy it just seems to help.  This shampoo smells great!  It left his coat real shiny and soft.  On top of that again I was real excited that I was using a green eco-friendly and natural product on my dog.

My dogs fur and skin was left lemony fresh after using this shampoo on him and was really silky to the touch.  This shampoo is concentrated so it does need to be mixed with water and even though this is a little bit of a hassle, but it does give you more product for your money which is great since everyone wants to save a dime every once in awhile.

I thought that I had planned everything out before I had my son four months ago, but I obviously hadn’t.  No matter how prepared I have been over the years I never could get completely prepared to having a baby in my home.  I have had so many oops moments in the past four months […]

After throwing my son’s first birthday party last year I learned a few things that are making the process much smoother this year. I struggled to remember everything last year so I wanted to make it much easier to remember things this year and I thought I would share some of my tips with you […]

What do I REALLY need to start you Cloth Diaper Journey? I asked myself this a million times and looked at a bunch of different resources and asked a lot of moms the same question because if I was going to start attempting this new cloth diaper journey I wanted to make sure that I […]

After a few weeks at home I soon began to struggle.  I was constantly exhausted and there was not much I could do my hubby and his mom had both gone back to work and I was suddenly home alone with a newborn and I panicked.  I asked everyone for advice.  The responses were mixed […]